Are you wondering if it’s worth going to Disney Aulani with teenagers? Find out about the best Aulani activities there are for teens at Aulani, a Disney Resort & Spa in Hawaii. Scroll down for all the info!

This Disney Aulani activities for teens post contains affiliate links which means if you purchase something from one of my affiliate links, I may earn a small commission that goes back into maintaining this blog.

Aulani, A Disney Resort and Spa is situated on the beautiful Hawaiian island of Oahu. We had wanted to take our teenagers to Aulani ever since seeing it on the resort TV at Walt Disney World.

However, being from the U.K meant that it was an expensive bucket list trip that would take years to save for.

But in 2013 we made the decision to join the Disney Vacation Club (DVC), with the full intention of using our points to visit Aulani.

We knew that the best time to take our kids was when they were teenagers and able to cope with the 19 hour journey!

So a few years after joining the DVC, we booked our flights and headed round the world to check it out.

There is a lot to do at Aulani, including plenty for toddlers, tweens and adults only. But what Aulani activities for teenagers are there to do?

We spent two weeks at Disney Aulani, with our kids. Did it live up to our expectations? Read on to find out what we thought of the resort. 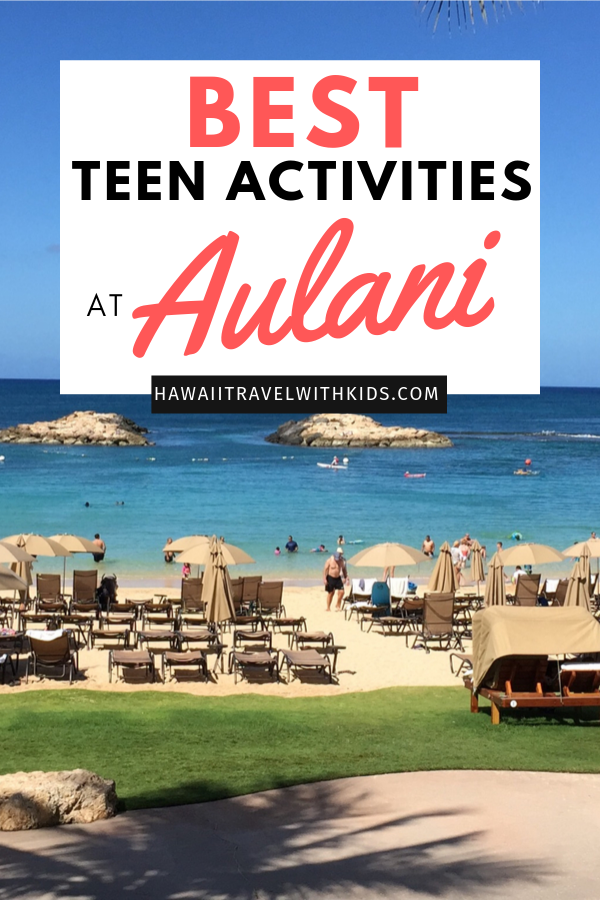 The kids were so excited for the water park! Although it is small – it consists of two water slides, the Waikolohe Stream lazy river and a pool – they loved it.

There is also the Ka Maka Grotto, a second pool with an amazing view!

Pool parties take place in the Waikolohe Pool and Disney characters join in with the fun. It’s open to everyone, and the teens seemed to enjoy this just as much as the toddlers.

They spent hours in there playing crazy games with friends they made while on vacation. In fact on several occasions they opted for a pool day rather than to go out and explore the island.

There are a few watersports available at Aulani. Most are an additional cost, although there are some discounts for DVC members.

Makiki Joe’s is located on the beach and is where the watersports equipment is hired from.

Our kids enjoyed using the complimentary boogie boards and had great fun splashing around on them. The boards are available on a first come, first served basis so there may be a wait if none are available.

We hired paddleboards to take out on the lagoon one afternoon. Paddleboards are available to hire for an hourly rate, currently $45 per hour but that is subject to change.

Aulani has direct access to a small lagoon, with a beautiful white sandy beach stretching the whole way round it. 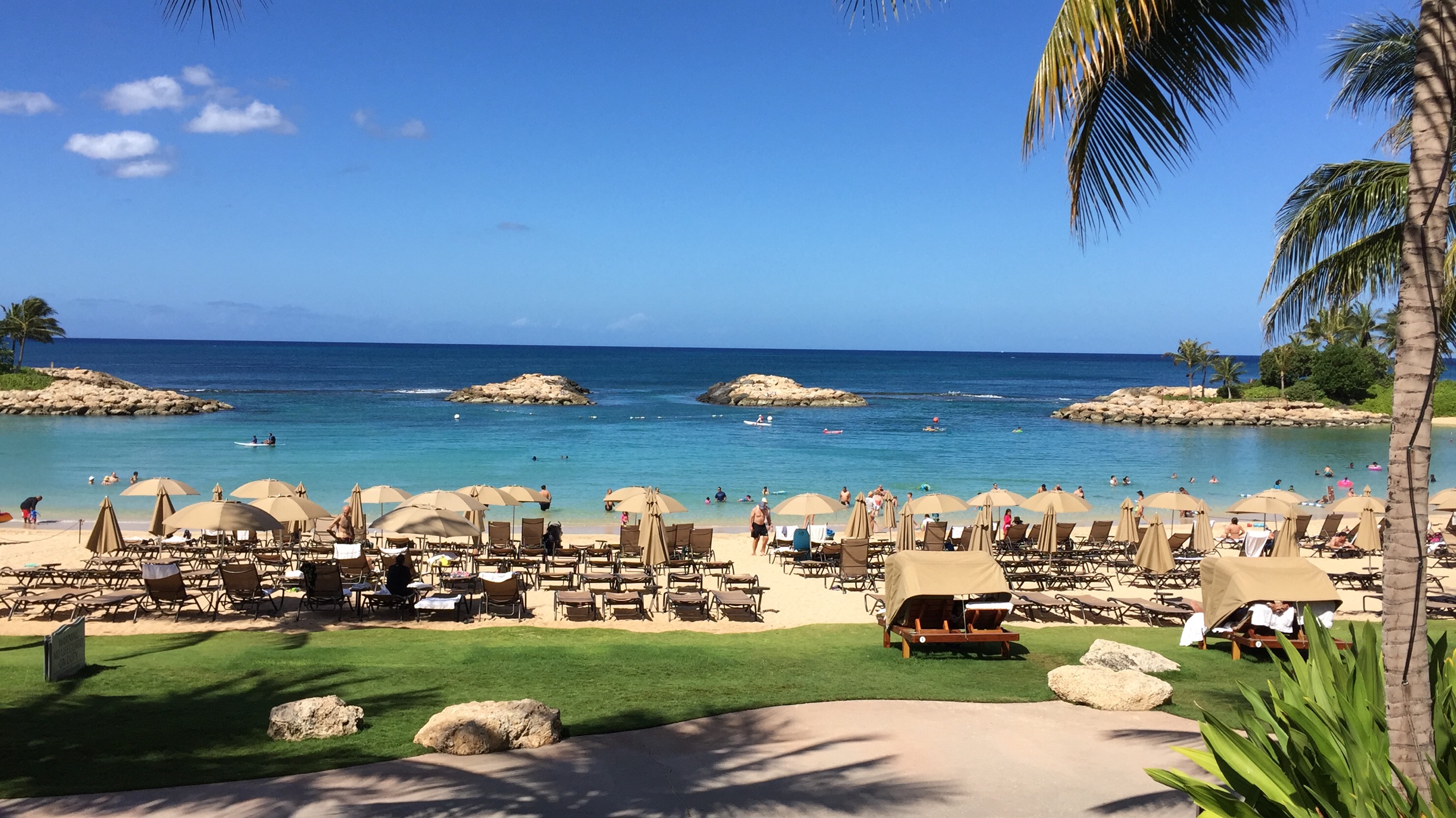 The beach gently slopes into the lagoon and it is fairly shallow for quite a distance. Great for people who are a little daunted by going into the ocean.

There are plenty of sun loungers, some with umbrellas, available for the exclusive use of Aulani guests.

A variety of teen activities take place on the beach. For sporty teens there are the North Shore Beach Zone and Island Beach Challenge activities. And for those who prefer something a little less energetic, the Sunset Mele is lovely.

This event is for teens only and celebrates Hawaiian music and culture.

Look out for Ki’i’one, a fun sand-sculpting event that takes place on the beach. Teens divide into teams and compete to make the best sand sculpture.

It is worth noting that the beach isn’t private and can be accessed from both sides by anybody.

Snorkeling is also available at Aulani. Snorkel gear can be hired for $25 per day and includes one-day access to Rainbow Reef.

If you don’t want to snorkel in Rainbow Reef, you are permitted to use the snorkel gear in the lagoon. Our kids enjoyed doing this, and it was a good introduction to snorkeling.

There are a lot of activities aimed specifically at teens aged 14-17.

Some of our kids’ favorites were Game Night, the Aloha House Party and the Sunset Lei Making. These activities are supervised by Cast Members but teens are allowed to come and go as they wish.

Our kids had great fun and made several friends at these events and they then all hung out together for the majority of our vacation.

There is a beautiful spa at Aulani that is for 18+. However teens aged 14 and over are allowed to experience certain treatments, so long as an adult accompanies them.

Our daughter enjoyed having a manicure in the spa.

What to do in the Evening at Disney Aulani

The evenings at Aulani are fairly slow paced and activities tend to finish quite early. 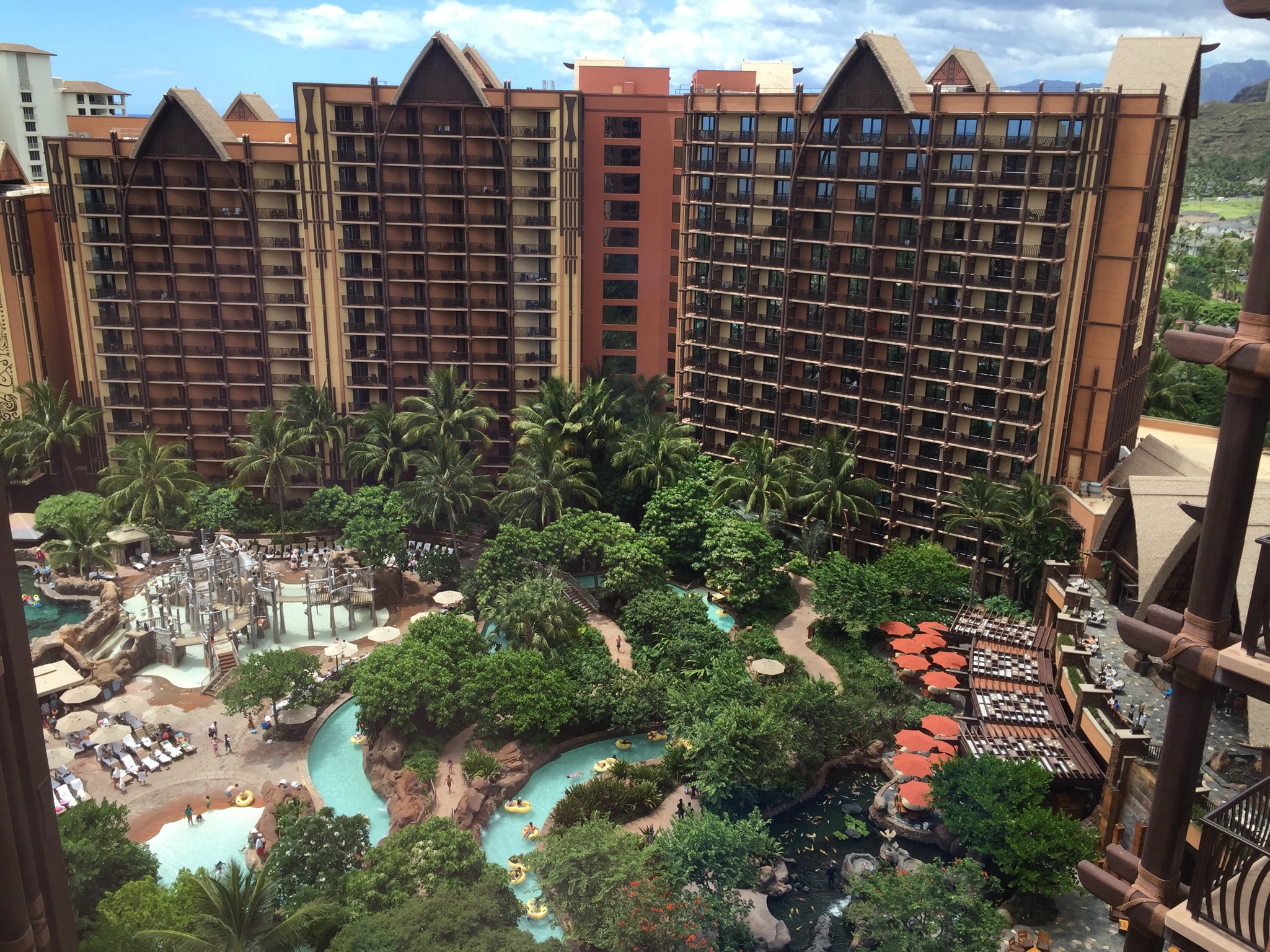 There is however a few things to keep the teens occupied.

At least once a week, there is a Disney movie shown on the lawn that is open to everyone. Although this is not specifically aimed at teens, they did enjoy grabbing a pizza and then sitting out to watch a movie.

Other evening activities include ukulele lessons and treasure hunts just for teens.

The evenings are quiet, unlike the Disney parks where there are shows and fireworks to entertain guests at night. If the kids are bored, DVDs can be borrowed from Community Hall.

Activities for Teens Outside the Disney Aulani Resort

We couldn’t go to Oahu and not explore the island. There was so much outside of Aulani to see and do. Here’s some of our teens’ favorites:

This beautiful ranch will feel so familiar because it is the setting for so many blockbuster films and TV shows.

We did the Hollywood Movie Sites Tour and it was fantastic. We had such a good time and didn’t want our tour to finish!

If you’re feeling energetic then blow off some steam climbing Diamond Head. We did the hike in the morning before it got too hot and it was already busy with visitors.

It’s a fairly gentle climb, although to reach the summit there is a steep set of stairs, but the views from the top are absolutely amazing.

Teens will love Waikiki. There is such a buzz to this area and even if they don’t fancy surfing themselves, just watching the surfers is fun.

Honolulu is the most urban part of Oahu. It’s great if your teens want to do some shopping, or if you want to grab something to eat.

Our teens enjoyed the day we spent at Pearl Harbor. Their favorite parts were going onboard the Battleship Missouri and the Bowfin Submarine, as well as seeing the USS Arizona memorial.

The Aloha Swap Meet takes place at the Honolulu Stadium.

If your teens want to pick up some gifts to take home for friends then this is the place to take them. There are a variety of stalls selling local crafts, Hawaiian shirts and all sorts of souvenirs.

There’s very little shade here and it does get hot quickly, so go early.

This is on the North Shore of Oahu and it took roughly 45 minute to drive there.

There are 6 different Polynesian Villages in the Polynesian Cultural Center. Each one teaches you about their culture and many offer hands-on activities to take part in.

Every afternoon there is a canoe pageant, with dancers and music from each of the villages.

During our visit we also enjoyed the Luau and dinner and the Ha Breath of Life evening show.

While you’re on the North Shore, drive round to Haleiwa and enjoy a shave ice from Matsumoto.

Final Thoughts on Taking Teenagers to Aulani, A Disney Resort and Spa

Although there were many things to keep our teenagers occupied, many of them felt as if they were aimed at younger teens. I’m not sure 16 or 17 year olds would enjoy the activities as much. 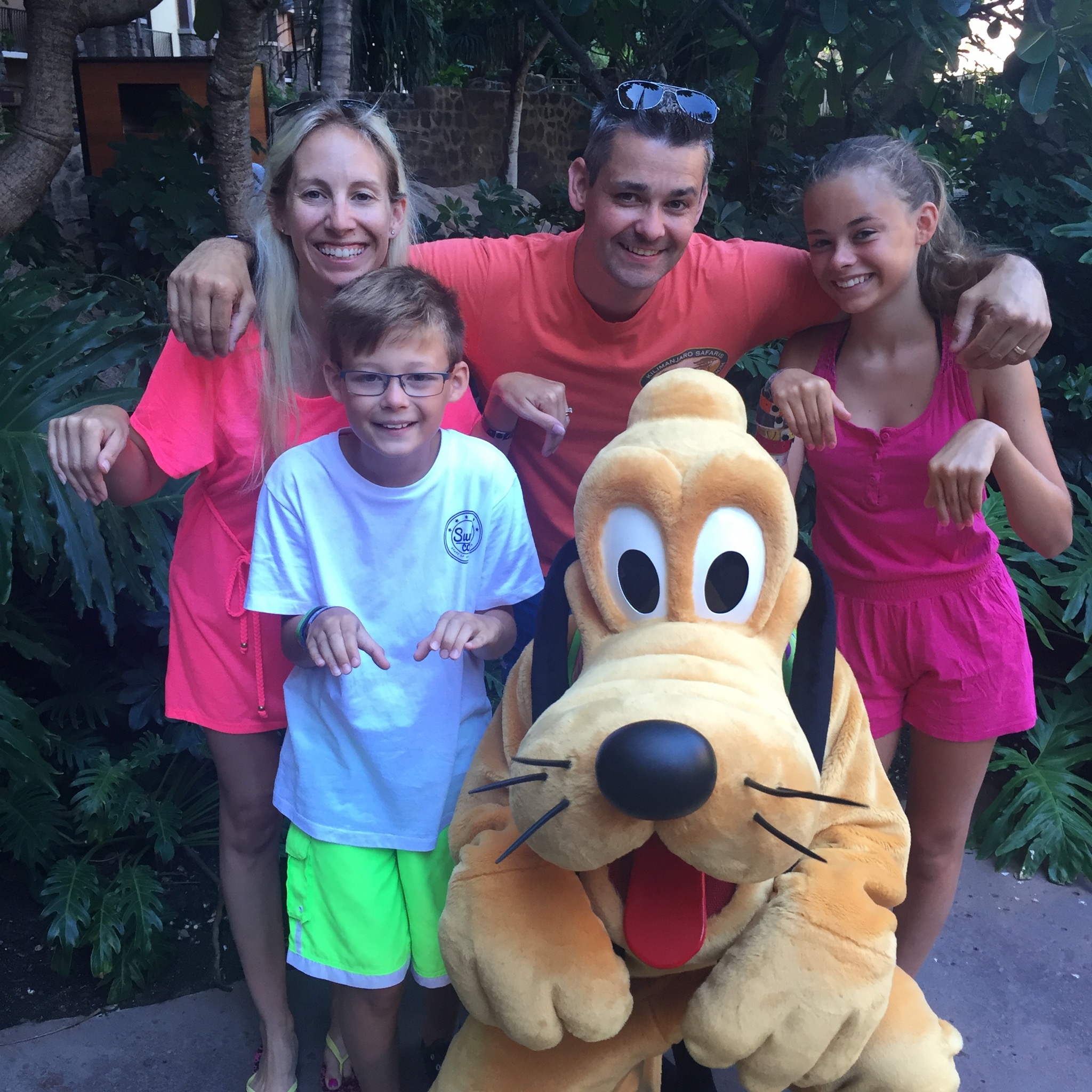 The evenings were the least enjoyable part of the trip for our teens because they felt there wasn’t much to do past 8.30pm.

This wouldn’t put us off of visiting again, we would just be better prepared for how to spend that time.

We really enjoyed our stay at Disney Aulani. In fact our kids say it was the best vacation they ever had and our son is always asking us if we can go again!

If we did return to Disney Aulani we probably wouldn’t stay as long. Two weeks was lovely and relaxing, but next time we would probably stay for a week and then move on to one of the other islands.

A week is plenty of time to enjoy everything all the Aulani activities the resort has to offer!

Sam lives in Essex in the UK with her husband and two teenagers. Sam writes Memories and Mayhem Blog, a lifestyle and travel blog for women in their 40s who want to redefine what midlife looks like. She loves to practice yoga (but rarely gets enough spare time to do it) and is always planning her family’s next vacation. Her love languages are shoes, coffee, books and Disney but not necessarily in that order.

Aulani Resort Dining Guide: the Best Food to Eat And Drink In and Around Disney’s Aulani Resort