Trying to Disneybound on a budget? Head to your local Goodwill to find the best deals on pieces perfect for your budget-friendly Disneybounding looks!

This Disneybounding outfits at Goodwill post contains affiliate links which means if you purchase something from one of my affiliate links, I may earn a small commission that goes back into maintaining this blog.

The post is sponsored by Goodwill Olympics and Rainier Region. All opinions are my own. I’m seriously impressed with the deals I’m scoring there!

If you’ve been watching my Instagram Stories, you’ll know I’ve been working a lot with Goodwill lately.

That’s because it’s October and it’s one of the best places to get creative Halloween costumes without costing an arm and a leg.

Goodwill is unique because they offer both thrifted items as well as new costumes and accessories for a cheaper price than other thrift stores.

That’s because they negotiate special rates in order to save everyone some hard earned cash.

Not only is it a great place to find Halloween costumes, now is also the perfect time to head to Goodwill to get some killer Disneybounding looks!

In preparation for the first-ever Oogie Boogie Bash at Disneyland Resort, I headed to Goodwill and met up with Whitney, one of their incredible Halloween experts.

Because she knew I was coming, Whitney pulled anything that might be something useful to create a Disney look.

I told her that I wanted to figure out how to be a pin-up style Dole Whip. So, she set aside anything bright yellow or that featured a pineapple.

Because the Oogie Boogie Bash lets adults wear costumes inside the Parks, we had a lot more options!

I originally was just looking for my Oogie Boogie Bash costume, however, there were so many amazing options that I grabbed an additional Disneybounding look to also wear at Disneyland Resort!

Whitney helped me come up with two adorable Disneybounding looks I wore at Disneyland Resort during Halloweentime. Let’s see what we came up with: 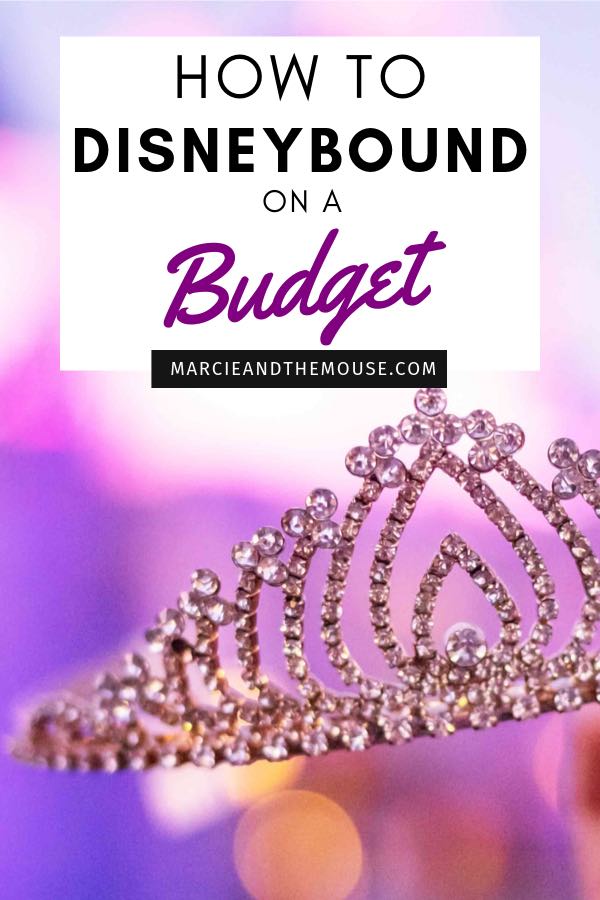 I’m so glad this Dole Whip Disneybound worked out!

Whitney found me the most perfect, bright yellow dress that was a fit and flare style in my exact size. Talk about a tall order!

So, that’s when Whitney got really creative. She grabbed a pair of donated Minne Mouse ears (can you believe someone donated them!?!) and she headed straight to Pinterest.

She offered to DIY the cutest pair of Dole Whip ears I’d ever seen.

This is above and beyond what Goodwill usually does and she did this out of the kindness of her heart and because she likes a good challenge!

I’m so thankful she did because I’m not remotely crafty like that. She also found a headband with two pineapples on it, which was a great back up plan.

Another option would have been to put a tropical flower in my hair (which I have tons of from my days as a professional hula dancer.)

It still felt like it was missing something, so we walked around the store and spotted a kelly green handbag. It was just the pop of color I wanted!

I already had crinoline that I usually wear with my Disney dresses, so I was able to use that.

And I decided to use some brown huarache sandals that I already own because it fit the tropical vibe and I know they are comfortable enough to trek all over Disneyland.

I have to say, my Dole Whip costume was a HIT at the Oogie Boogie Bash! I had so many people come up to me to tell me how much they loved my costume.

A few people told me they dressed as Dole Whip in past years but liked my outfit better!

And I got lots of nods and smiles as people liked my subtle display of affection for my favorite Disney treat!

Plus, I was SO comfortable the entire party!

And because our family motto is: Anything worth doing is worth OVER-doing, I couldn’t leave Goodwill with just one look.

One of the last dresses I tried on was the gorgeous blue pencil dress. It begged me to wear it for a Cinderella Disneybound. I mean, I had to listen, right?

So, I told Whitney that I wanted to also create a Cinderella Disneybounding outfit. She ran to the back and pulled out a tiara and a little silver evening purse. They were so perfect!

I already had strands of knock-off Chanel pearls from Hong Kong, so those were the main components of my look.

We tried finding “glass slipper” shoes at Goodwill but that was tricky. They had tons and tons of gorgeous silver, sparkly high heels that would be perfect for someone else.

However, I knew I would be walking around Disneyland for at least 12 hours and can not (and will not) do that in heels.

Because I was short on time, I ended up finding a pair of silver flats at Nordstrom Rack that were incredibly comfortable. And I should be able to use them for an Elsa Disneybound I’m dreaming up right now!

This Cinderella Disneybound was such a fun look to wear at Disneyland.

I ended up wearing it in Star Wars: Galaxy’s Edge and kept telling Batuu cast members that I was a princess from a far off galaxy!

My only regret of the entire trip is that I didn’t get a photo with Cinderella so I could include it in this post.

Oh well, now I have an excuse to wear it next time!

How to Create Your Own Custom Disneybounding Look at Goodwill

When you start to think about all the characters you can ‘bound as, it can be overwhelming.

So, start thinking about which characters make you smile. Write those ones down.

THINK ABOUT YOUR SPIN ON THE CHARACTER

Are you going for a comfortable outfit with sneakers to wear in the Parks? Are you dressing up in high heels? Are you creating a feminine version of a male character (or vice versa?)

I’m a huge fan of vintage looks. I like to wear dresses and skirts at Disneyland and Walt Disney World.

That helps me as I focus my energy on finding vintage-looking dresses and skirts that will work for my Disneybounding ensembles.

After you think you’ve narrowed down your characters, head over to Pinterest and see what kinds of looks other people have already come up with.

Whether or not you want to copy entire looks or certain details is totally up to you. Or simply use it as inspiration to get your own creative juices flowing.

Goodwill can be a bit of sensory overload with so many unique items. I find that it’s best if I bring in pictures to help keep me focused.

As soon as you enter Goodwill, find someone to help you. Trust me. They know the store inside and out and they know what merchandise was just put out.

Show them your photos and explain the characters you are trying to create and they will point you in the right direction.

DON’T STICK TO THE HALLOWEEN SECTION

While the Goodwill Halloween section has some fantastic items, don’t spend all your time there.

Sometimes you’ll want a specific color or type of clothing. Just because it’s in the regular clothing section doesn’t mean it isn’t perfect for your Disneybounding look!

So, plan on visiting a few different Goodwill stores. And plan to re-visit the same ones, too.

Goodwill gets new merchandise all the time and the restock several times each day so there is always new stuff.

GET THE REST OF YOUR ITEMS ONLINE

Goodwill is the perfect place to get the basic items for your Disneybounding outfit. I usually find awesome dresses, skirts, tops, and bags.

But, if you are looking for something really specific (like a pineapple accessory or silver flats) you’ll probably need to go to another source.

I find a lot of cool accessories on Amazon, Etsy, or Halloween-specific shops.

And don’t forget to check Instagram. There are a lot of people with Disney-specific Instagram shops that have the coolest things!

Have I inspired you to head to your local Goodwill and start combing the racks for your next Disneybounding look?